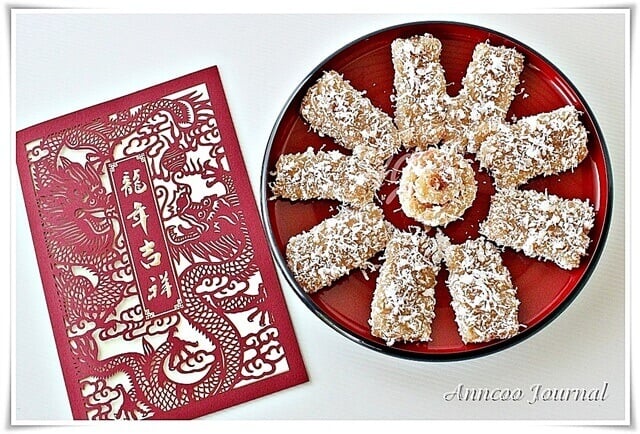 Nian Gao, Year Cake or Chinese New Year’s cake is a food prepared from glutinous rice and consumed in Chinese Cuisine. It is considered good luck to eat Nian Gao during Chinese New Year because ‘Nian Gao’ is a homonym for ‘higher year’. The Chinese word‘ 黏’(nian), meaning ‘sticky’, is identical in sound to 年,meaning ‘year’ and the word ‘糕’(gao)，meaning ‘cake’ is identical in sound to高,meaning ‘high’. As such eating nian gao has the symbolism of raising oneself in each year year(年年高升nian nian gao sheng).
Here I steamed the Nian Gao together with white grated coconut and serve them within 10 minutes. This method is healthier than pan fried and you can also dip them with ground peanut like Muah Chee.
Nian Gao 年糕 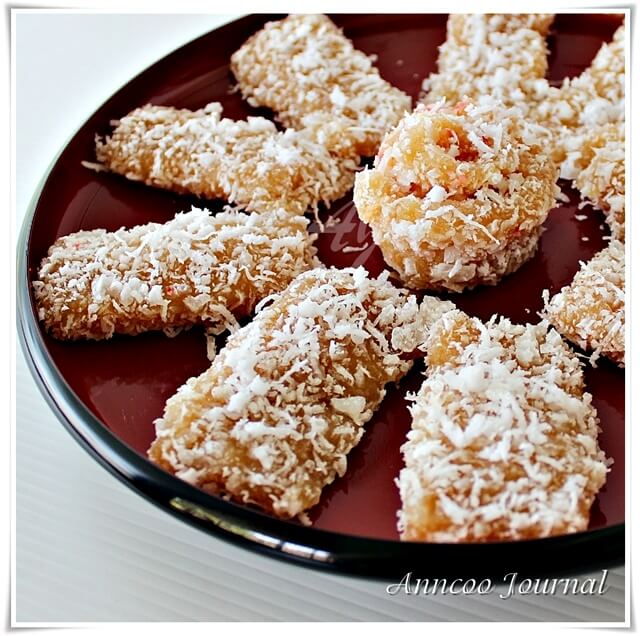 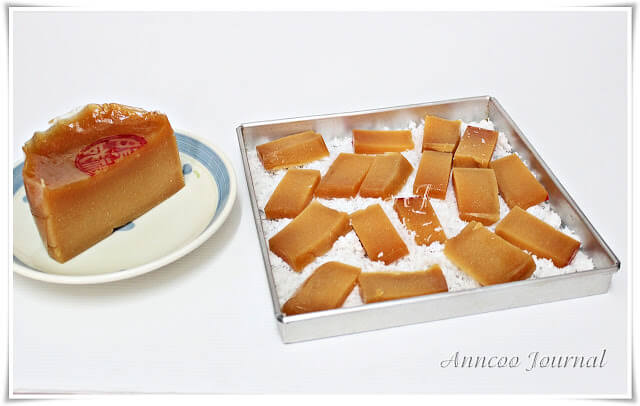 Pour half packet of white grated coconut on baking tray with a little bit of salt.
Cut nian gao into small slices and lay over it. Steam at high heat for 5-6 mins. 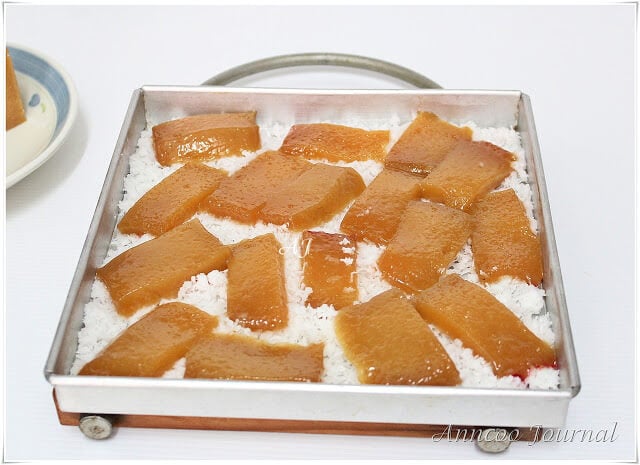 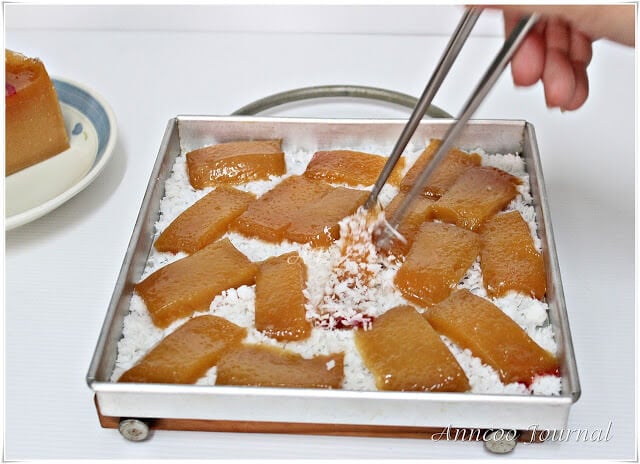 Coat nian gao evenly with a pair of chopsticks. 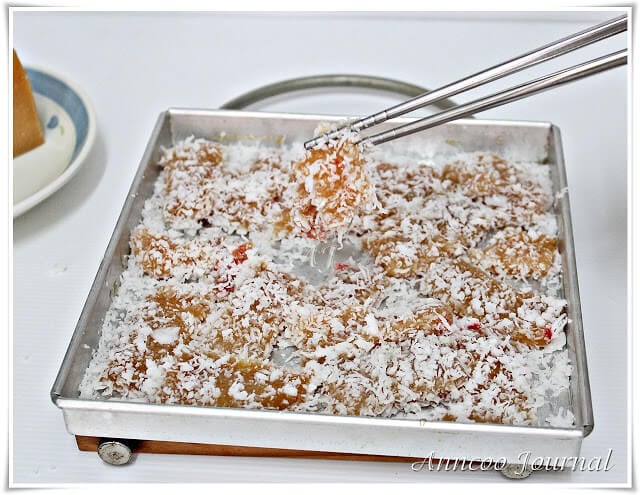 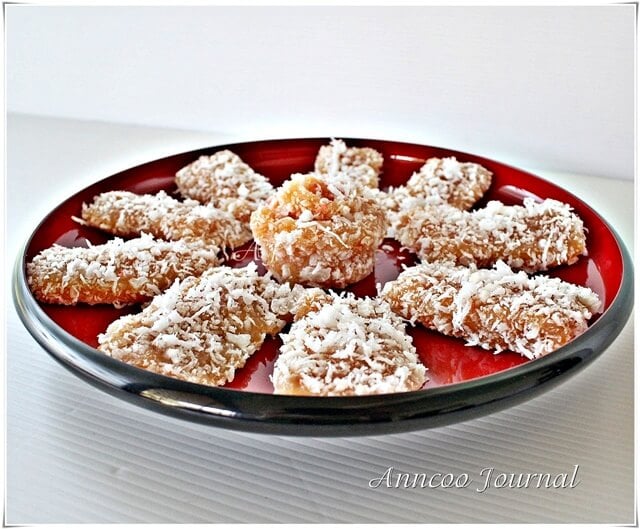 Anne,You can try this with grounded peanuts but must remember to grease oil on the nian gao to prevent sticking.

Thanks for sharing this great idea, steaming nian gao on the grated coconut which makes te nian gao more pliable rather than one goey mess. Shall try soon, thanks once again. And I love your presentation, eye-catching as usual. Thumbs up!!!

what a creative use of nian gao, reminds me of oneh oneh. I have to try it XD

With the grated coconut on the nian gao, it looks like those tapioca kuih!

yum, yum, yum! i havnet touched my nian gao yet!

Happy CNY Ann! I seldom serve NG this way, lazy to go out get fresh coconut, hehehe . Now at my mom place waiting to Pai Tin Kong, and I also prepare your fish jelly, will post up soon ^_^

Sonia,hehee… this way is a lazy method lah!Can&#39t wait to see your post of the fish jelly 🙂

Oh this looks so drooling, it craves me, great combination with desiccated coconut!

Hi Ann, great to see this dish being posted when we are still celebrating the CNY!I grew up in a small village in Malaysia where all the experienced good cooks would make "nian gao" & distribute to the neighbours & because of that, my mum never had to make them.And I still remember that mum would normally use either sweet potato or taro to sandwich the "nian gao" & pan fry,that&#39s how we ate that.

Jessie,I also like the M&#39sian version because not too sweet.

Oh wow, this is something special! Ive not tasted nian gao served this way before! Almost like eating a nonya kueh! Thanks for sharing this! Wishing you 好运年年,步步高升!

Bee,Thanks!Happy CNY to you too 🙂

This is my favourite way of eating nian gao, I have never liked them fried, unless if fried with yam! hehehe!

This is very special, I&#39ve not tried eating it this way! I&#39m sure it will taste very coconuty and nice! 🙂 Thanks for sharing this!

Jane,hehee… this is quick and lazy method to finish off the nian gao quickly. 🙂

Yummy! That day i fried the nian gao with sweet potato then my mom in law asked me try to steamed with grated coconut. Now I saw ur easy recipe. Thks

Jes,You&#39re welcome. I also like the fried nian gao but quite oily.

Ann, you are back from the CNY break. I didnt have any nian gao this year…here I come to "bai nian" and ask for a "nian gao" from you.

Li Shuan,Happy CNY to you and Jane! Still a bit lazy after the break.Sure, let me know when you&#39re here. 🙂

Cheah,This is my lazy method. For health purpose is better to have less oil and less salt nowadays.

&#39Gong Xi Fa Cai&#39 to you & your family, Ann! These steamed nian gao sounded just like old days but the nian gao used need to be fresh & still a little soft, not the old ones which is hard and only nice for deep frying. Btw, Happy Belated Birthday to you. I bet you had a wonderful time with your family. Enjoy & have more fun!BlessingsKristy

Kristy,Gong Xi Gong Xi!No worries lah… after steaming the nian gao, its still soft after the next day as long as the coconut is very fresh. I just packed the remaining into a container and keep it in room temperature.

That&#39s how my mother would serve the nian gao to us when we were young, simple and delicious!

wow! i love that. thanks for sharing.

Hi Ann, this is one of the best way to clear the nian gao stock. 🙂 Lovely presentation, I like the centre piece, look like a rose.Have a nice day.

Amelia,Ya lor… in previous year you can still find nian gao in my fridge… 😀

Gong Xi Fa Cai, Ann! We always fight over how we should do this at home. I like it sandwiched between yam and potato and deep fried but some other members like them this way, steamed and coated with coconut. So to prevent a war, we get both at the same time. 😀 Your pictures are gorgeous!

Hello Ping,恭喜恭喜!Thank you for your compliment 🙂

I used to steam mine this way too, to ease cleaning. But my MIL doesn&#39t like the taste of steamed coconut. She prefers it raw, so she asks me to steam it separately.Love the rose centerpiece 🙂

Wendy,Thanks. Happy CNY to you!

Ooo – putting it in coconut looks far prettier than how I did mine! Happy new year!

My favourite treat, my mom makes it every CNY. We actually stuffed our nian gao with coconut and placed red dates on top. Have a nice week, Ann!

This is my first seeing this version of preparing nian gao. so pretty.

Happy New Year Ann! I have not eaten nian gao in ages. USed to have it steamed like this rolled in fresh coconut when I was a kid. Looking at your pictures make me crave for some.

Biren,Next year you can make your nian gao at home. It is quite easy to make and of course using fresh coconut is better.

That&#39s such a nice way to dress up nian gao! I always fry it with eggs. I must try this way next time. The only thing is I can&#39t get the fresh coconut here. I think it won&#39t be as nice with desiccated coconut. Maybe it&#39s still better to move to Singapore and stay somewhere near you 😀

Hi Mary,I also wish you can move here to stay away from the cold weather :)Never use desiccated coconut for dipping… definitely not nice.

Happy Chinese New Year to you!The nian gao looks delicious, and very pretty too – and I love simple it seems to make.

Thanks for sharing such an easy and terrific idea for serving the nian gao!

Ann this looks wonderful, too bad I can&#39t say it reminds me of the way I used to eat it. I would really like to try it!

Hi Lyndsey,This is a healthier method to eat nian gao. Really hope you can try it.

I love this nian gao receipe.. usually we pan fried them with egg. I can imagine the combination of the coconut and nian gao fragrance, it tastes superb!

Bobo,Yes, it is not too sweet or oily eating the nian gao this way.

What a festive post, and I really love your shots!:) My mum loves Nian gao and she always tells us about the auspicious meaning/symbol of these sticky cakes, as you have mentioned at the beginning of your post;)Happy Chinese New Year to you!!:D

Thank you Christy.Happy CNY to you and your family 🙂

This is a good idea Ann, coat with grated coconut. I saw another blog, she wrap nian gou with popiah skin and fry it.. Another method also.. both very creative!

Rosamundwo,Yes I tried with popiah skin before too but uses a lot of oil.

yes! nice to et it this way. If able to find the thick pulp of the young coconut it is better…

Small Kucing,hahaa… I want to look for it!

Hi Ann, happy Chinese New Year! I love coconut, so this recipe is definitely a keeper (: I&#39ve nominated you an award on my blog, hope you&#39ll like it! (:http://foodismylife.wordpress.com/2012/01/29/cold-abalone-slices-with-sweet-and-spicy-sauce-awards/

Thank you very much Jasline! I am so honoured to have this award from you :)Gong Hei Fatt Choy!

Picture Perfect Ann and I imagine it tastes simply delicious. Oh how I would love a nibble:)

Thank you so much for sharing your holiday food with us. Happy New Year!

Thanks for sharing this great idea, steaming nian gao on the grated coconut which makes te nian gao more pliable rather than one goey mess. Shall try soon, thanks once again.
And I love your presentation, eye-catching as usual. Thumbs up!!!

With the grated coconut on the nian gao, it looks like those tapioca kuih!

Thanks for sharing such an easy and terrific idea for serving the nian gao!