Home › Sweet Treats › Ice Cream › Wasabi Ice Cream (Wasabi Aisu)
Hello, hope you all had a great weekend. Today I would like to share with you this creamy and smooth ice cream that I made before the weekend. This is no ordinary ice cream…not Vitamix…not Chocolate, but Wasabi Ice Cream (Wasabi Aisu)…cool and ‘hot’ at the same time, not bad at all though definitely not for everyone. Wasabi is actually a Japanese plant. Its root is used as a spice and is the main ingredient for horseradish most commonly served with sushi. This is one of the weird ice cream which is popular in Japan where you can find it at popular food street in Tokyo. You can find more weird ice cream from this site. 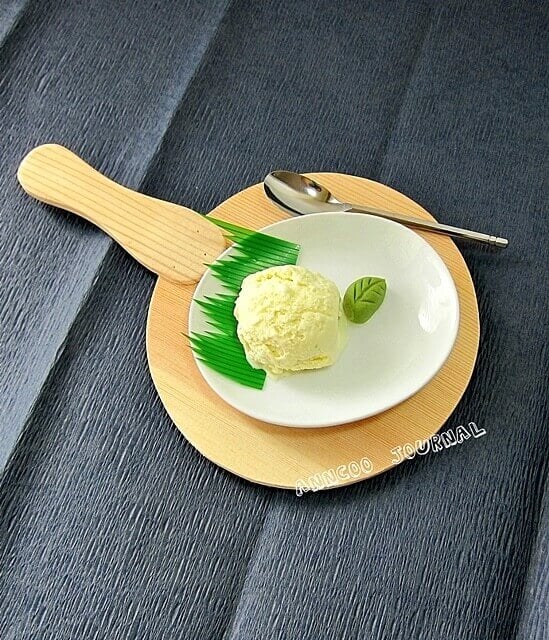 Hope you enjoy this cool and ‘hot’ ice cream as much as I do ;DD

I am submitting this post to
Taste Appetite
Event: Letz Relishh Ice Creams

What a creative way to enjoy ice cream. I love the way you plated it. :o) super cute

Wow that is daring, my friend. But I think with my love of all things spicy I&#39d enjoy this very much.

Never had wasabi in dessert before! Definitely intriguing and very creative 🙂

wow i would love to try this… 😀

Oooh, I love this! I had this once in a restaurant in Paris and wanted to make it at home. When I surfed the net for a recipe, I found a funny video with someone just freezing directly a vat of wasabi then serving to their enemies :-)This recipe looks brilliant and must try your version. Lovely photo, too!

I enjoyed looking at it but don&#39t know if I am going to like it:P the wasabi went up to my nose once and that had stopped me from trying to take wasabi in large doses since! I am quite wary of wasabi in everything lol!

Such a cool ice cream flavour! So special!

I can see lots of challenges and adventure eating this creamy yummy ice cream. This is new to me.

Annocoo, this is the most unusual thing that I have aver heard, and now I am as well wondering how it would taste like hahaha..Looks amazing, as any vanilla ice cream would, and I lovee Wasabi..I am totally confused, I am thinking of the taste..:))))Thank you for sharing, your presentation is always beautiful as well as your pictures!

this sounds really special 🙂 The way u display the ice cream is fantastic. I think i will be tempted to eat this even if i dont like wasabi.

Hi, Thank you very much for linking 🙂

@My Little SpaceKristy, must give this a try..hahaa…just be a little adventurous lol!

This is so cool, I mean hot, Ann 🙂 Love this unique ice cream you&#39ve made!

@KatherineThank you very much for coming to my site. I must say this is rather a weird ice cream, either you love it or hate…hahaa..

Thank you friends for dropping by. This is the type of weird ice cream, either you love it or hate…hahaa..Be adventurous and give it a try ;))

The first time I ever heard of wasabi ice cream it blew my mind away. I thought it was a genius idea to bring together and play with hot and cold in food. I&#39d love to try this one day. Great presentation, Ann. This looks very tempting.

Very creative! Can serve with sushi or not? ;p

@LeQuanThank you very much for your lovely comment LeQuan. You can try to make this at home too.

Rebecca from Chow and Chatter

what a fun ice cream tingly on the tongue lol

ann, this is really so special and very rare here. wasabi makes me cry.. i wonder eating this ice cream will make me cry..haha! i&#39ve tried out your recent egg drop jelly but made some slight changes. Have put a link back to yours.

@Jill ColonnaHi Jill, thank you very much for visiting. I really hope you will make this and give a try. Let me know your result 🙂

Wow, I have to admit that wasabi ice cream is very different, and I thought that having garlic ice cream was something different 🙂 Like the idea of cold and hot. Hope you are having a great week Anncoo 😉

Tigerfish ~ hehee..why not! Next time I will try to make sushi ice cream as well :))Penny ~ Thanks!Jean ~ yes, I&#39m curious at first too.Ann ~ WOW! You and Elin tried this before…really good huh?Yummy Bakes ~ Many people are curious on the taste of this weird ice cream, must give a try then you can tell ;DD

Wow…wasabi ice cream !!! Anncoo you really have me yearning for it. I had this ice cream at the korean restaurant once in KL and love it. Thanks for sharing the recipe with me 🙂 Well done and I am sure it taste good..hot and cold yumyum I like it !

@Biren @ Roti n RiceBiren, you must try this to surpise your hubby…you will get the taste of sweet and spicy in this dessert.

OMG! i saw this on those jap restaurant&#39s menu and i&#39ve never tried it. you sure made it look so lovely and delicious! not to say, is unique (:

Looks really creamy! Really curious as to how it will taste like hehe

How does the ice cream taste like with wasabi? Hmmm … curious?

@SandraThank you Sandra. hahaa…even my hubby looks confused by the taste at first 🙂

I had this once at a restaurant, very shiok!

@Xiaolu @ 6 Bittersweetshahaa..Xiaolu, sometime we need to be a little adventurous..don&#39t you think so?

@ElinElin, Oh..you can find this in KL? When I&#39m there I must ask for the restaurant name from you and give a try.

Ann, I want to try this out. I like wasabi and I think I&#39ll probably addicted to it. ha… Thanks for sharing. Hope you&#39re enjoyin your evening.Best regards, Kristy

I am a huge wasabi fan, I adore it. And I&#39ve heard of wasabi ice cream before, but have yet to try it. I really need to do this!

Ann you had me at Wasabi 🙂 I love wasabi and combining it with ice cream I can only imagine how great it tasted. Really want to try this now. Thanks for participating in this month’s YBR 🙂

I&#39ve never heard of wasabi ice cream and just love the idea! Found you on Spicie Foodie&#39s YBR and glad I did!

Absolutely fabulous recipe..your pics are awesome..Thanks for linking to my event..:)could u plz add the event logo at the end of your post as per event rule..Tasty AppetiteEvent: Letz Relishh Ice Creams

Esther, 假如你喜欢wasabi,就会喜欢这点品。Tata ~ thanks for your nice comment. I want to pass you a napkin…heheeHanushi ~ must try first lol!Angie ~ thanks :)Fresh Garden ~ Thank you very much for dropping by. So glad you love this ice cream.Sook ~ I thought this is also available in Korea. Make sure you try this when you&#39re in Korea.Juliana ~ I don&#39t think I want to try if there is really garlic cream because of the strong smell..hahaa –thank you!

@Spicie FoodieThanks Nancy! Will support YBR all the way!!